The Warrandyte Festival Committee was incorporated on the 9th of February 1984. With the purpose :

Following the success of the first presentation of ‘This is Warrandyte’ in 1977, a weekend festival has annually demonstrated the charm and community spirit that makes Warrandyte one of Melbourne’s most appealing outer eastern suburbs. The celebration originated with humble ambitions, mainly to see townspeople coming together in celebration of Warrandyte’s distinctive qualities. 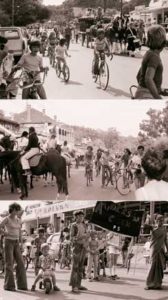 A year later, John Hanson introduced his Historical Gold Mine Tour – shining a light on the history and workings of an 1850s gold mine – which has been going strong ever since.

In the 1980s, APEX, Lions and Rotary got involved. APEX built and financed the Stiggants Reserve Main Stage and Rotary began its Art Show.

Local schools, including Warrandyte Primary, began to shine… Led by esteemed music teacher, Kevin O’Mara, Warrandyte Primary established a school bush band, which got kids singing songs about Warrandyte and being proud of living in the bush. Kevin and his band, Paradiddle, also played the grand finale on Sunday night for many years. Some say they had more comebacks than Dame Nellie Melba!

The ‘80s saw the introduction of ‘Yarra Yobbo’s’, a series of events featuring Sulo bin races, rolling pin and gumboot throwing competitions and The Undie 500, a race around the reserve and down the Scouts giant water slide.

While Yarra Yobbos is no longer contested, the Billycart Derby and Duck Race, also created in the 1980s, still remain strong festival favourites..

Sixty large canvas banners were hand-painted by local community groups and schools to herald the lead-up to the annual celebration. Organised by artists from Warrandyte Arts Association, the banners were displayed from power poles, a tradition that is still looked forward to today!

The Youth Stage officially got a gig at the local football ground, giving local garage bands an opportunity to perform. Today, youth bands fight for the top prize of a day in a recording studio on the Main Stage in the festival’s iconic Battle of the Bands.

The 1990s saw pie throwing competitions and talent quests. Young people were offered the opportunity to learn circus skills and perform them during festival workshops.

Market umbrellas were painted by local artists and auctioned off at the end of the weekend to raise fund for next year’s event.

It was also during this decade that the festival committee started selecting a King and Queen of Warrandyte to lead off Saturday’s Grand Parade. Monarchs continue to be chosen each year for outstanding contributions to the Warrandyte community.

At the end of the ‘90s, Words Unplugged appeared for the first time under the festival umbrella. This event offered an evening of readings of poetry, prose and letters by noted local authors and poets. The literary showcase changed its name in 1999 to The Grand Read, so called for its historic Grand Hotel venue. This much-loved closing event occurs on the Tuesday evening following festival weekend.

The 2000s saw the introduction of a beer brewing competition and the Family Bike Ride, among other things.

The festival’s Grand Parade, which demonstrates a new theme each year,, continues to give children and adults alike the opportunity to showcase their kindergarten, school, sporting and hobby groups.  Entrants in the parade are encouraged to celebrate the theme by decorating floats and wearing costumes.  Since early days, a joke still ripples through the town’s adoring crowds that there are more people actually in the parade than watching it!

By 2008, Warrandyte Festival Committee had 39 members putting together its fun weekend. Many of these ardent supporters have encouraged their children onto the organising committee. Today – as many of those children still live in Warrandyte with their own families – some of the festival’s original founders are able to watch their grandkids participate in the Grand Parade, representing their local school or sporting group.

Because of this ‘generational baton changing’, along with all the volunteers who make up the festival committee, this unique celebration of Warrandyte and its undeniable community spirit continues to foster.